6 Books to Read Before They Hit the Screen 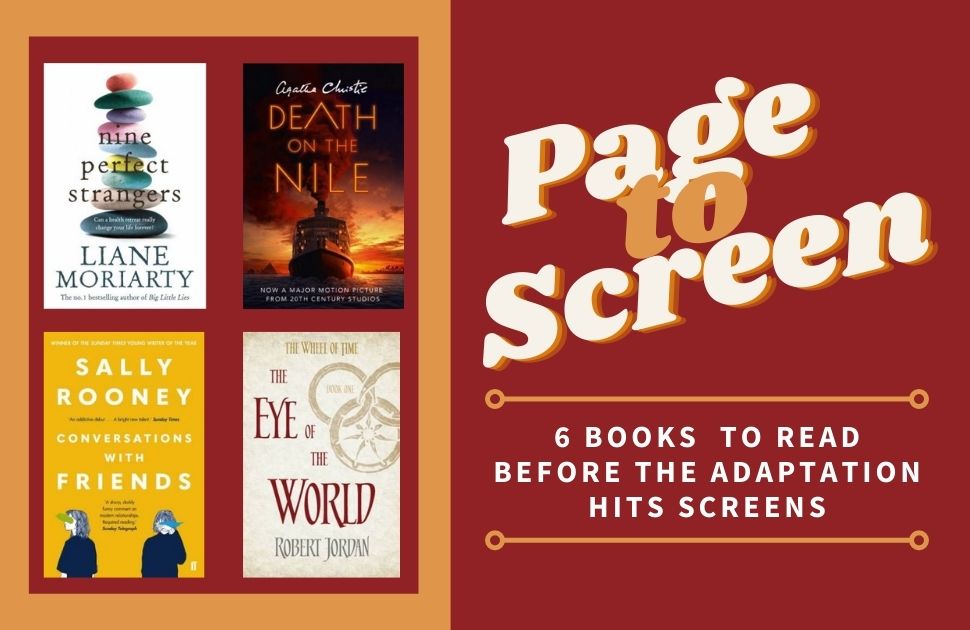 Looking for your next read? Take inspiration from La La Land and add these books to your reading list before they hit cinema and TV screens (and become the subject of everyone’s conversations!)

The retreat at boutique health-and-wellness resort Tranquillum House promises healing and transformation. Nine stressed city dwellers are keen to drop their literal and mental baggage and absorb the blissful meditative ambience while enjoying their hot stone massages. They are all on a path to a better way of living. Or at least a better waistline.

Watching over them is the resort's director, a woman on a mission to reinvigorate these tired bodies and minds. But to what lengths will she go to achieve her goal?

These nine perfect strangers have no idea what's about to hit them...

Coming to screens later this year, this mini-series was filmed in Byron Bay and features Nicole Kidman, Melissa McCarthy and Samara Weaving.

Dune by Frank Herbert
If you enjoyed… The Stand by Steven King, A Game of Thrones by George R.R. Martin
Before The Matrix, before Star Wars, before Ender's Game and Neuromancer, there was Dune: winner of the prestigious Hugo and Nebula awards, and widely considered one of the greatest science fiction novels ever written. Melange, or 'spice', is the most valuable - and rarest - element in the universe; a drug that does everything from increasing a person's life-span to making intersteller travel possible. And it can only be found on a single planet: the inhospitable desert world Arrakis.

Paul, his son, and Lady Jessica, his concubine, flee into the desert. On the point of death, they are rescued by a band for Fremen, the native people of Arrakis, who control Arrakis' second great resource: the giant worms that burrow beneath the burning desert sands. In order to avenge his father and retake Arrakis from the Harkonnens, Paul must earn the trust of the Fremen and lead a tiny army against the innumerable forces aligned against them. And his journey will change the universe.

Coming to the big screen later this year, the cast includes Timothee Chalamet, Oscar Isaac, Josh Brolin, Rebecca Ferguson, Javier Bardem, Jason Momoa, Dave Bautista, Stellan Skarsgard and Zendaya, in one of the most anticipated blockbusters of the decade.

The Last Letter from your Lover by Jojo Moyes
If you enjoyed… Me Before You by Jojo Moyes, Firefly Lane by Kristin Hannah

When journalist Ellie looks through her newspaper's archives for a story, she doesn't think she'll find anything of interest. Instead she discovers a letter from 1960, written by a man asking his lover to leave her husband - and Ellie is caught up in the intrigue of a past love affair. Despite, or perhaps because of her own romantic entanglements with a married man.

With Shailene Woodley ( Divergent, Big Little Lies) and Felicity Jones (Rogue One) starring in the adaptation, this is one for the romantics to enjoy on Netflix!

The Eye of the World by Robert Jordan
If you enjoyed… The Lord of the Rings series by J.R.R. Tolkien or are looking forward to another epic fantasy series after Game of Thrones

The first novel in the Wheel of Time series - one of the most influential and popular fantasy epics ever published. The Wheel of Time turns and Ages come and pass, leaving memories that become legend. Legend fades to myth and even myth is long forgotten when the Age that gave it birth returns again. But one truth remains, and what mortal men forget, the Aes Sedai do not . . .What was, what will be, and what is, may yet fall under the shadow.

Rosamund Pike from Gone Girl leads the cast as Moiraine, the Aes Sedai character who acts as a mentor and guide to her younger charges.

Where The Crawdads Sing by Delia Owens
If you enjoyed… Eleanor Oliphant is Completely Fine by Gail Honeyman, Educated by Tara Westover

For years, rumors of the "Marsh Girl" have haunted Barkley Cove, a quiet town on the North Carolina coast. So in late 1969, when handsome Chase Andrews is found dead, the locals immediately suspect Kya Clark, the so-called Marsh Girl. But Kya is not what they say. Sensitive and intelligent, she has survived for years alone in the marsh that she calls home, finding friends in the gulls and lessons in the sand. Then the time comes when she yearns to be touched and loved. When two young men from town become intrigued by her wild beauty, Kya opens herself to a new life - until the unthinkable happens.

Perfect for fans of Barbara Kingsolver and Celeste Ng, WHERE THE CRAWDADS SING is at once an exquisite ode to the natural world, a heartbreaking coming-of-age story, and a surprising tale of possible murder. Owens reminds us that we are forever shaped by the children we once were, and that we are all subject to the beautiful and violent secrets that nature keeps.

Not only was it a Reese Witherspoon x Hello Sunshine Book Club Pick, (Reese herself said "I can't even express how much I love this book! I didn't want this story to end!") but she is also leading the book-to-screen adaptation starring Normal People’s Daisy Edgar-Jones as Kya. Expect to see this one on the big screen in 2022.

Agatha Christie's most exotic murder mystery, reissued with a striking new cover designed to appeal to the latest generation of Agatha Christie fans and book lovers. The tranquillity of a cruise along the Nile is shattered by the discovery that Linnet Ridgeway has been shot through the head. She was young, stylish and beautiful, a girl who had everything – until she lost her life. Hercule Poirot recalls an earlier outburst by a fellow passenger: ‘I'd like to put my dear little pistol against her head and just press the trigger.' Yet in this exotic setting' nothing is ever quite what it seems…

Frances is a cool-headed and darkly observant young woman, vaguely pursuing a career in writing while studying in Dublin. Her best friend and comrade-in-arms is the beautiful and endlessly self-possessed Bobbi. At a local poetry performance one night, Frances and Bobbi catch the eye of Melissa, a well-known photographer, and as the girls are then gradually drawn into Melissa's world, Frances is reluctantly impressed by the older woman's sophisticated home and tall, handsome husband, Nick. However amusing and ironic Frances and Nick's flirtation seems at first, it gives way to a strange intimacy, and Frances's friendship with Bobbi begins to fracture. As Frances tries to keep her life in check, her relationships increasingly resist her control: with Nick, with her difficult and unhappy father, and finally, terribly, with Bobbi.

Desperate to reconcile her inner life to the desires and vulnerabilities of her body, Frances's intellectual certainties begin to yield to something new: a painful and disorienting way of living from moment to moment. Written with gem-like precision and marked by a sly sense of humour, Conversations with Friends is wonderfully alive to the pleasures and dangers of youth, and the messy edges of female friendship.

Conversations with Friends is being adapted by the same team that brought us the Normal People adaptation so you know it is going to be worth keeping an eye out for on TV in 2022.

Explore these great reads and more at QBD Books Elizabeth.